Tomas Harker revisits stories of the past – navigating the history of art and our shared cultural heritage, he draws inspiration from classical paintings and found photographs to re-present traditional narratives through a contemporary lens.

Works of great artists of former times are hijacked from their original context to explore the dark side of our psychology, subconscious fears and desires, and universal themes running throughout history. Original narratives are disrupted. Visual clues emerge from the obscured, discombobulated space created on the canvas. At times leaving you unsure if a figure is disintegrating or self-detonating. Tomas’ painterly language directs you from violence and horror to the ephemeral and transcendental, with an immediacy and rawness that is alluring and intoxicating.

Nocturnes, visions of dark wonderlands, are a preoccupation. Uncomfortable, disorientating, uncanny, they leave you to fill in the gaps. Within this world you get a slight feeling of familiarity but cannot be sure. They force the viewer to slow down as you are immersed. Something is going on just below the surface; something is being revealed. But what is disclosed feels tantalisingly out of reach. Although it may be better to keep hidden, you feel compelled to search for it.

There is a sense of erosion and decay, a reference to the timeless subject of mortality and vanity and the inevitability that all is eventually lost. Classical gods, monsters, idols, heroes, villains, rulers, faces of hegemony, all play out their part– as if in remembrance or as a warning. The paintings are an odyssey; they are an exploration that is sometimes subversive and disturbing, other times disinterested and emancipating. Questions are asked, without imposing a definitive answer or judgment. Ideologies are examined; relationships of power and subjugation are put on trial. It becomes apparent that parallels are being drawn between the past and present times.

Tomas has exhibited his paintings across the UK, including in an exhibition at the Tate Modern, Flux Exhibition at the Royal College of Art, and the Soho Revue Gallery in London. He has previously had two hugely successful solo shows and has taken part in group shows alongside a host of highly respected artist such as Damien Hirst, Marc Quinn, and Cecily Brown. Tomas has received recognition from esteemed critic the late Brian Sewell and gained glowing appraisals from many publications such as Vogue Magazine. 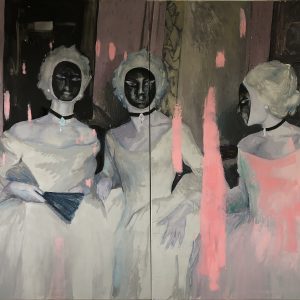 This was all Folly